My newsletters from Leave A Legacy had to take a few months off since we have been short staffed for a while and we are blessed with lots of Legacy projects to work on. Here are several of the highlights!

When Lee left home she took all her pictures with her. When her brother left home he did not take any pictures with him. Fast forward many years, they are selling the family home after their mother passed away, and there are no family photos in the home. All the photos that were of Lee’s brother are lost forever. So Lee decided to give her brother a special gift and share her photos with him. Picking through her photos she found some of just their extended family, their parents together, and some of herself with her brother when they were little. Some of the photos Lee is having us restore and print two copies. Then she is going to make a scrapbook for him. 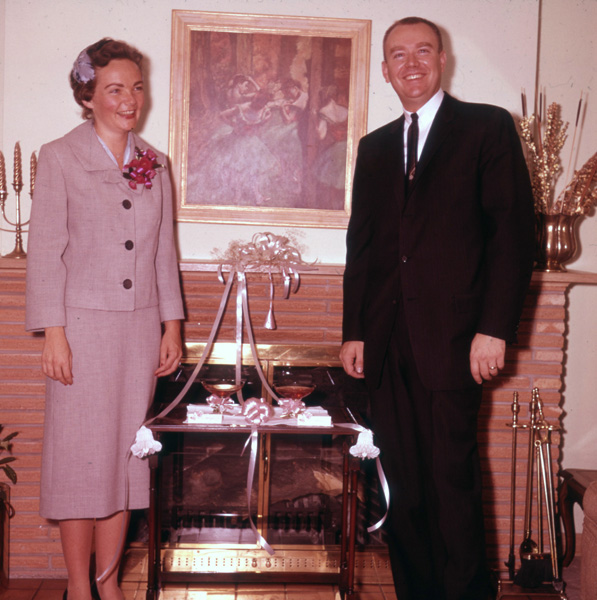 Martha brought in a collection of slides to scan extra high resolution for printing and putting up in her parent’s home. Martha’s parents have passed on and since then Martha’s own home was burned in the High Park fire. This lone slides was mysteriously in the bottom of a folder for insurance. This folder was one of the few things she grabbed when leaving her home.  We agreed it is priceless.

Bill brought in his “legacy in photos” to scan and make digital for him.  He had them meticulously organized and labeled. We ended up photo scanning 6,000 photos into 367 folders.  That was quite a downsize fitting all those boxes of photos onto a flash drive.

Scott brought in an old cassette to transfer to digital that was an oral history interview with his grandfather from a 1973 recorded by the Loveland Public Library (link to here a bit). Scott is going to share the mp3 file with almost 30 cousins. He talks about his life and Loveland history (he was a big fan of CO history). What a priceless memory to share!

We do a lot of work for Cyndy who is digitizing all of her family photos and other media.  This time she brought in a reel of super 8 film and we transferred it to digital.  It is a long lost film she did not know she had. All other films had been previously transferred to vhs and were from the 70’s.

This lone reel had no labels on it and no writing on the developer’s package either. The postmark told us that this mystery reel is from the 80’s. Cyndy said this reel possibly has footage of her father and her children’s’ father on it, both of whom have passed away.  It looks like a father’s day cookout. See a clip of it here.  Cyndy put a rush on it to have it transferred in time so she can share it with her two children when they visited for Easter. I most enjoyed the footage of the older gentleman shuffling about in the backyard. This newsletter is so delayed that we can share feedback from Cyndy who has come back in to the store since she picked this up! After picking up the transferred film she went home that night and watched it, then watched it again with her children while they were visiting that weekend. Success! It was emotional to see the memories she did not even know were captured on film.

Lavon brought in a large framed wedding certificate. The photos were faded and very light, especially the groom. The text was also very faded making it difficult to read. We brought it all back to its original glory. Fun fact about the creative border around the certificate are doilies that Lavon’s mother glued together to be a sort of matting to fit the frame.

Joyce brought in this picture taken by her brother. He has since lost the original and this is the only surviving copy. Joyce is having us make

him a new copy, cards and a digital file. This photo, like many others, came with quite a story. The note on the back of the frame says it all “This is a picture taken by my brother Gary. The man’s name in the picture was Walter. He is in a restaurant that is no longer open, in Boulder Colorado called Fred’s Steak House. Walter was a man who had very little. Living day to day. Gary tells the story of this man coming to Fred’s Steak House, at the owner’s invitation, every day. The owner told him he could order whatever he wanted and he would feed him. This was a restaurant that served a high class menu. Walter ordered soup every day.” 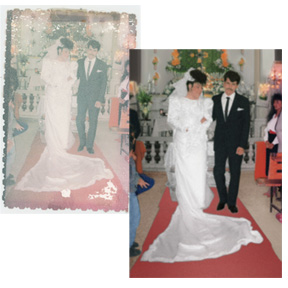 Jeanette saw our window display about photo restorations and brought in a really damaged, old wedding photo. The ink on the photo was literally falling off crumb by crumb as it was sitting on our front counter while we wrote out Jeanette’s order. She was amazed at the results and is excited to share the reprints with her siblings. 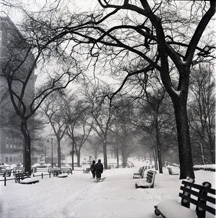 Nann wanted us to scan and make a print from her negative. The negative was taken by her father. He went to Columbia University in the late 50’s and was very interested in photography. This is a photo he took of Central Park after a big snow storm. His wife loved the photo so much that she had it blown up and framed and mounted. She also gave a copy to every member of the family. Well at that time Nann’s nephew was just a little boy. Meaning his parents got a copy but he did not. Now he is the only person in the family who does not have a copy. He always points this out and was just remarking about it, giving Nann the idea to have a copy made for him. Nann decided to bring the negative to us and have a picture printed for her nephew as a gift for Father’s day! What a wonderful surprise for him. When Nann’s mother originally had this done many years ago, whoever made the photos actually processes the photo backwards. Meaning that all the photos that each family member has mounted shows the park bench on the left side. And if you would go to Central Park to this exact location you would find the bench on the right side, as depicted above, from when we scanned the negative.