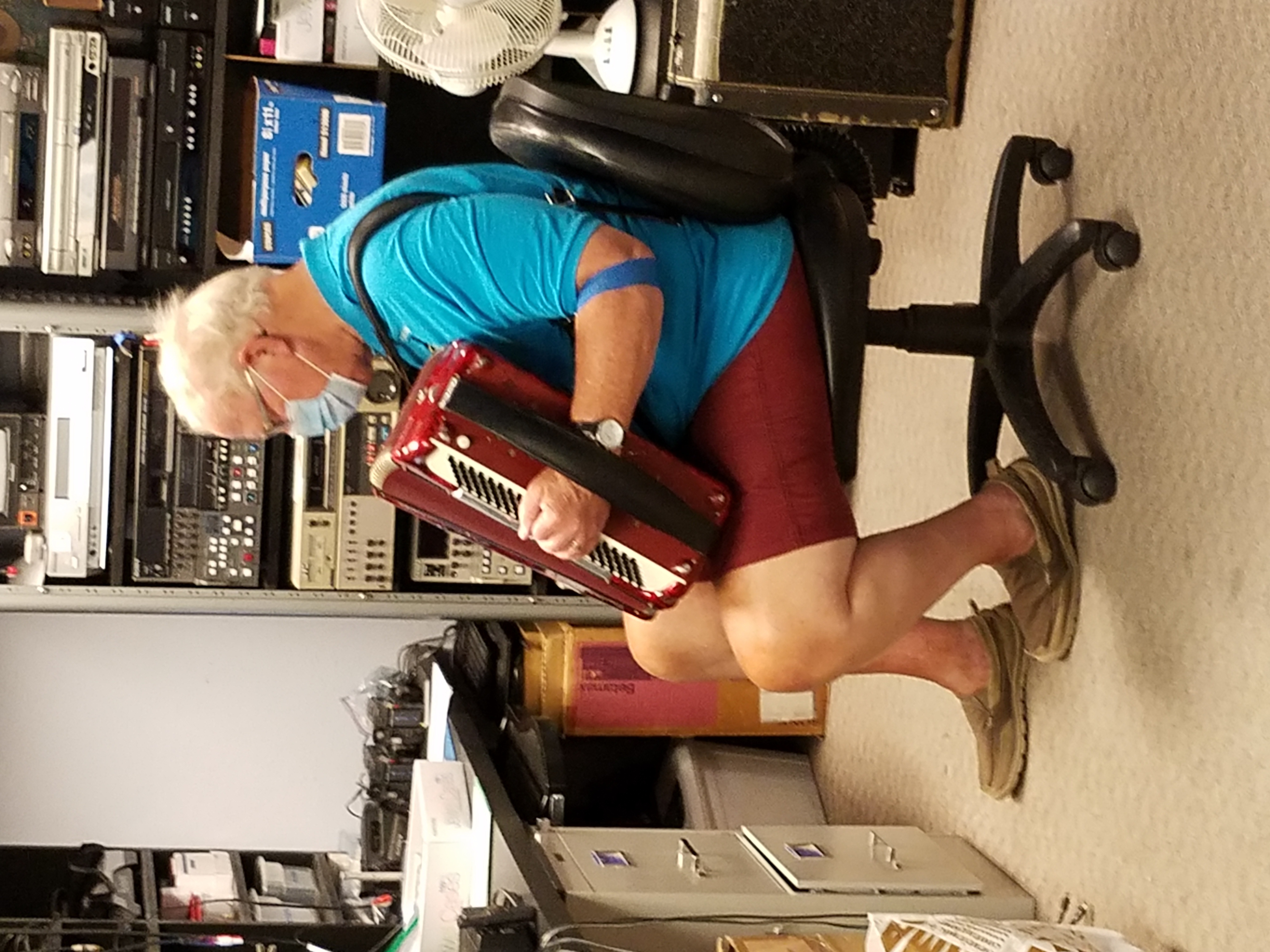 Our client needed to record his playing of 3 songs on his accordion so that it could be played at a friend’s funeral the next day. So we became a recording studio for him for a bit. Glad to help! It sounded beautiful. The following day we did a quick video recording for another client. She was scheduled to be an usher at her temple for Rosh Hashanah. She had to record a greeting for the congregation and upload the video to the temple since they were doing it all online this year. We captured her speaking as a video, edited it and uploaded it to the temple for her.

People are still cleaning out their closets and bringing

in loads of memories to be digitized.  We have one scanner busy full time scanning about 3000 slides for some local sisters who’s parents have passed.  We have another scanner working on slides 2500 from South Carolina for a client who lost his mother to COVID recently. He had pared down her 10,000 slides to the best ones to digitize.  Our third large scanner is busy scanning about 9000 negatives for a local client who is going through a divorce. She is getting everything including her 99 hours of video tapes transferred to digital and saved on 2 external hard drives. One for herself and one for her daughter. 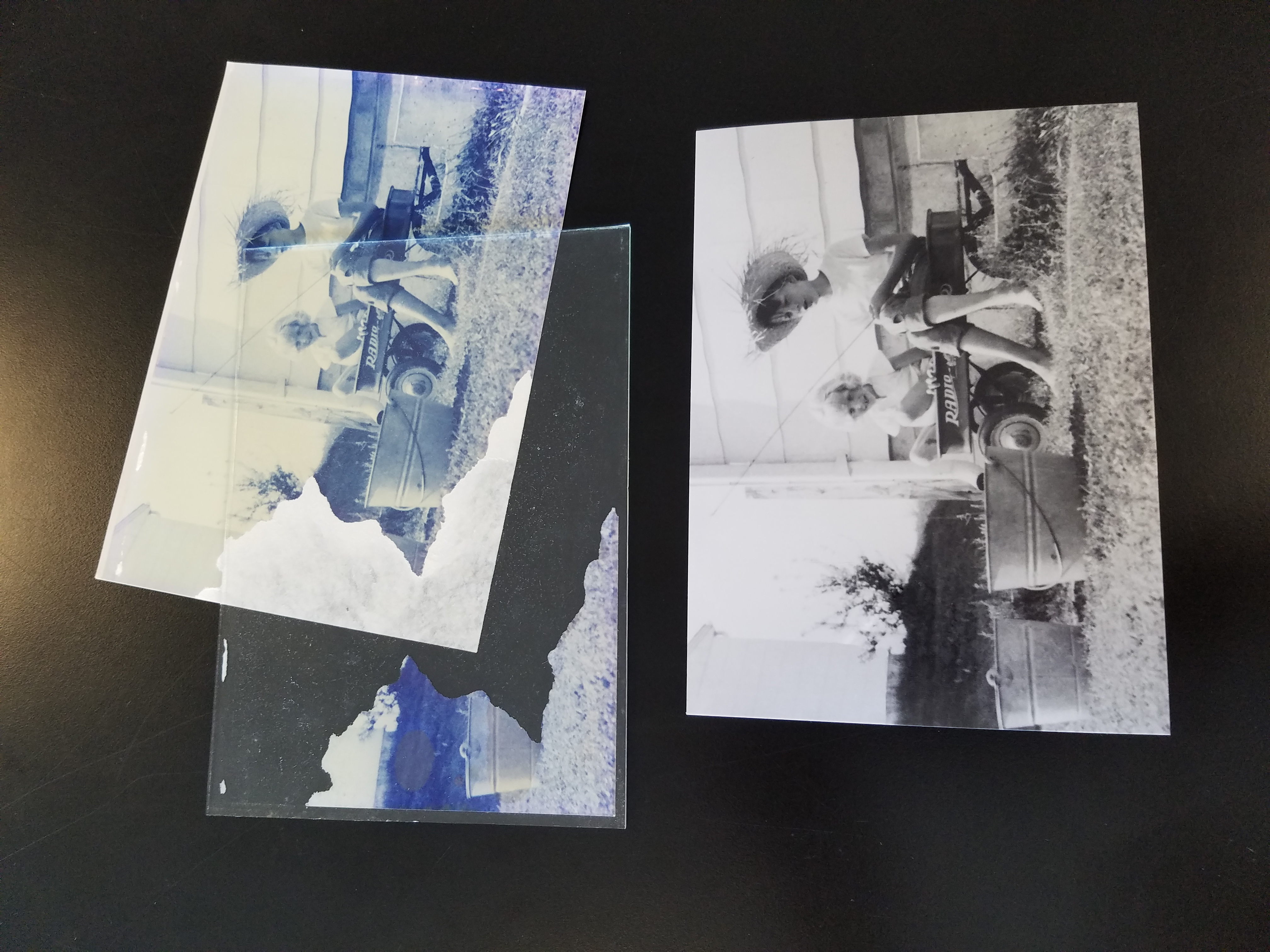 Shelley brought in this charming 1040’s photo of her brother that was stuck to the glass.  In the photo her now deceased brother is posed while fishing….in a bucket!  We scanned the photo through the glass then scanned it again once we removed it from the glass and scanned it again.  The glass was anti-glare so the photo is much sharper when no behind the glass.  Had another photo this month that was carefully mailed to us that was not only stuck to the glass but also the glass was quite shattered.  We scanned the photo of the 3 cute toddler girls through the broken glass and restored it on the computer.  The photo restoration of the 3 girls came out looking cute as ever. The client had told me that they all 3 just graduated from high school together. I didn’t get permission to share that photo as just one of the girls belonged to him.

Jim brought in an interesting film from the 50s about a Navy hazing tradition where seamen change from a slimy Pollywog (one who hasn’t crossed the equator) to a trusty Shellback (after they cross). A Navy seaman is considered a slimy Pollywog (one who hasn’t crossed the equator) until he has crossed the equator then he becomes a trusty Shellback. This film documents the hazing that was done to commemorate the event. We transferred this 8mm film for a client and gave him High definition digital files. Note the appearance of King Neptune, his court and the royal baby who’s stomach they have to kiss. It concludes with them taking a royal bath in a pool of sea water. Learn about the tradition here and see the film footage of it from our client here.

Dan brought in a 48” long photo, videos and an audio diary on cassettes of his experiences on the American Lung Association Trans American Trek that he did in 1987. We helped him by scanning and reprinting the photo, and transferring both the video tapes and audio cassettes to digital files. They raised more than $1 million and pedaled from Seattle to Atlantic City. Read more about it here.

Jennifer brought in 3 cute little kaleidoscope photo viewers. We were able to pop the base off of two of them and scan the little transparency within and the other she used her phone to take a photo of it through the viewer since we couldn’t pop the bottom off. We printed all of the images out for her.

We recently transferred 10 hours of video to an external drive for Jane in Ohio.  She wrote: We couldn’t be more pleased with our external hard drive of memories!  Great work.
Thank you! -Jane