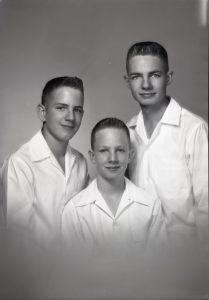 Brown-Harano Photography was located in North Platte, Nebraska and was open for over 70 years. Former owner of Brown-Harano Photography, Don Milroy, took over 80,000 photos throughout his time as a photographer. His photos were taken of historical events, families, graduations, and sports. As the photographs are sorted through, the names of who are in the photos are being put on a list. Families of who the photos were of, can come pick up their photos and choose to make a donation. Milroy donated all of his photos to the Lincoln County Historical Museum with the hopes that it will help raise money for the museum. Volunteers have spent 1,000’s of hours sorting through the photos and making the lists of names. Without the work of Milroy and the volunteers, the public wouldn’t have access to all of these historic and family photos.

Our client, Jim, found some of his family’s negatives at the Museum and brought them to Leave A Legacy to be digitized and printed. Jim told us the story about how he got them and we thought we’d do some research about it and share it with others so that maybe they can find some old family photos as well.